In town this weekend

Manchester anarchist bookfair on Saturday
http://www.indymedia.org.uk/en/regions/manchester/2009/09/438091.html
No official LRM literature but I will be contributing cake and i'm especially interested in the anarchy and archeology workshop.

Music, words, good people, games and more cake on Sunday
Its Dales extravaganza at The Britons Protection 4pm - 9pm and its the start of something big. this is what he says

For some time now I've been meaning to organise something for that period on a
Sunday afternoon/early evening when the horrible dread of Monday descends and
the prospect of being plugged back into the work machine for 5 days seems to
suck the air out of the world (if stuck here, remind yourself of what Sunday
evening felt like as a teenager!). I also promised a very fine local band that
I'd put on a gig for them after they played an acoustic set at a charity wine
tasting I put on last year. They are Ivan Campo and have a really good
reputation and following (they've also been picked more than once as a support
act for the mighty Liverpool band Shack).

Time: 4pm till 9pm. Wow, you can have a lie-in, do lunch(might I suggest, as
always, Cafe ModPop) AND get off early if you wish! How user-friendly is that?

Venue: Britons Protection, Great Bridgewater Street. Follow the tram lines along
the side of GMex (or whatever the f*** corporate name it has now) and you're
there.

Ivan Campo plus Black Jack Barnet plus other acts tbc and DJ the Magnificent
Martin the Mod. Joke competition and a raffle(fantastic prizes-ish..) and vegan
cake/sweets/stuff (although please be aware I am not putting this on as a
strictly vegan event). Compered by a wanker(that'll be me then). Does it get any
better?

Three quid on the door. Loads of beautiful warm friendly human people on the
other side of that door.

This is the first in a series of events. Be in at the start.

If you're at either please dont be shy, come and say hello xx
Posted by morag at 05:39 No comments:

It was good to see MAP (Manchester Area Psychogeographic) getting credit where it is due in The Mule article,they were a big influence in the early days of The LRM and continue to be heroes. Sadly much of their work isnt available online at the moment but a couple of peices lurk amongst the many treasures and bits of tat at www.uncarved.org - warning do not enter unless you are prepared to spend a bit too long looking at a computer screen. I especially like the zombie article
Posted by morag at 09:41 No comments:

the madness of cityco

There still paper copies of the rather ace latest edition of The Mule newspaper floating about town, it includes an article looking at the issues of public space highlighted by The LRM whilst getting lost last year

the same page (on print, sorry couldnt find it online) also features a peice by Alex aka bored in the city about psychogeography. Most welcome and interesting reading, whatever psychogeography is a key strength is how it has evolved to be interpreted by diverse voices although i do think a total lack of reference to the situationists is a little remiss. I'd love a wider public debate about what 'community engagement' means within an academic/artistic context... hmmm... watch this space.
Posted by morag at 09:31 No comments:

although its the last day of DSEI its salutory to ponder on what goes on in our name and neighbourhood
https://www.indymedia.org.uk/en/regions/manchester/2009/08/436864.html
Posted by morag at 09:28 No comments:

and this looks (sounds?) like a really interesting programme and a great site of wonders
http://www.speechification.com/
and yes, there will be a review of Iain Sinclair in Manchester soon too
Posted by morag at 04:59 No comments:

Hi all.
Here's a message from our (temporary) fearless leader, Alan for this month's first Sunday dérive:

God Save King James the Third!

This Sunday the LRM will be recreating the sights and sounds of the Manchester of 1745 when we rediscover the fabled events surrounding Bonnie Prince Charlie's brief sojourn in our fair town. Join us outside Sinclair's Oyster Bar / The Wellington Inn in the Shambles (opposite Selfridge's) at 2pm on Sunday for a tour of Jacobite Manchester from the Old Salford Bridge to St. Ann's Square and finally to Scotland! Show your support for the Young Pretender by wearing a white cockade or your finest tartan.

God Save King James the Third!

This Sunday (September 6th) the LRM will be recreating the sights and sounds of the Manchester of 1745 when we rediscover the fabled events surrounding Bonnie Prince Charlie's brief sojourn in our fair town. Join us outside Sinclair's Oyster Bar / The Wellington Inn in the Shambles (opposite Selfridge's) at 2pm on Sunday for a tour of Jacobite Manchester from the Old Salford Bridge to St. Ann's Square and finally to Scotland! Show your support for the Young Pretender by wearing a white cockade or your finest tartan.

Morag will be taking a well earned break this weekend so please don't call the LRM hotline.
Posted by morag at 09:30 No comments: 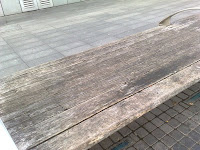 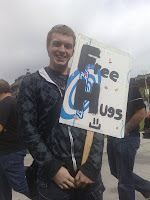 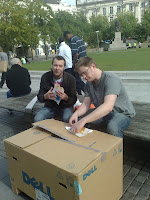 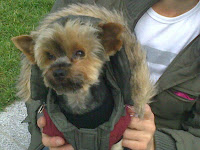 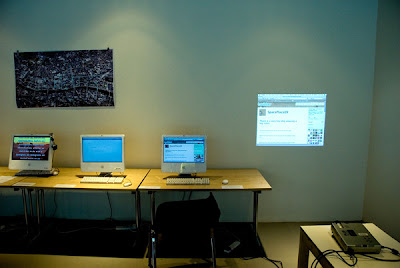 Questions raised
About public space,surveillance and voyeurism
Am I art?
How can we fix a social care system that fails many vulnerable people

Highlights
The many wonderful, random overheard quotes
Tom the free hug guy
Adele who was celebrating her MA
The portable pasty picnic table
Many inspired outfits (don't know how many were inspired by pride)
Messages from people watching the tweets unfurl - gillibobs said it was 'like watching an audio book slowly unfurl

Conclusion
Essentially I proved, and thoroughly enjoyed, that one can explore the city by sitting still. At the end of the day I felt elated and totally knackered but would love to do it again - any takers for a 24 hour shift?

Thanks
to everyone who helped made the day so special and especially to tom, alan, sean, dale and maureen for their support, conor and all at the space is the place, and of course the pigeons for sharing their city with me

Relive the action (and see photos) at www.twitter.com/spaceplace09

Septembers first Sunday is going to be a timetravelling spectacular with multisensory treats... Alan and Sean are organising something truly spectacular. I'm really sorry to say I will miss it but I must be elsewhere. Watch this space for details of when/where to meet xx
Posted by morag at 06:12 No comments: