Hello all, not strictly psychogeographical but the event is the result of serendipity and my wanderings in the desert 4 years ago

Cree Prophet Andrew Big Smoke is in Manchester to share stories and wisdom. Please come and join us this thursday (25th september) 7pm at the Friends Meeting House, Mount Street (off Albert Square)

To be truthful I don't know what to expect but I feel it will be inspirational. Please also spread the word as I know its short notice and i really want people to know about this xx
Posted by morag at 05:08 No comments: 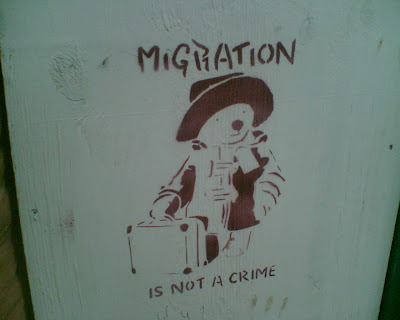 Below is a message from our friends at Manchester No Borders.... I am especially glad that they are going on another tour; the last was by all acounts a great success but sadly clashed with lots of TRIP activities (entirely my cock up that one) so i hope lots of people take this opportunity to see a completley different world within our city. The LRM stands in solidarity with No Borders for many reasons; put simply racism is stupid and shit, everyone is valid, noone is illegal, compassion is good and freedom of movement, like loitering, is a basic human right. Incidentally, am I the only person who thinks those 'Manchester Welcomes the Labour Party Conference' posters are blatant incitement to criminal damage?

On the 20th September the Labour Party Conference will return to
Manchester. To coincide with this there will be a demo organised by Stop The War and a counter conference organised by The Convention of the Left. Manchester No
Borders will be hosting a number of events including a block on the demo,
workshops, a tour of Manchesters immigration system and a punk and poetry
evening.

Saturday 20th September: 'Freedom of Movement' block on
the demo with the Anarchist Federation. Meet at 12:30pm All Saints Park.

Sunday 21st: No Borders tour of Manchester. An alternative
insight into the Capital of the North, taking in the physical outposts of the
government agencies and corporations involved in the UK asylum and detention
system. Meet outside the Mechanics institute 11am.

Tuesday 23rd:Imagining a World Without Borders: Manchester
No Borders hosts a series of talks discussing the history of migration and
resistance, power and borders, and how we can begin to imagine a world without
them. University of Manchester Student Union 7pm.

See you there, Manchester No Borders.
http://www.nobordersmanchester.blogspot.com/ 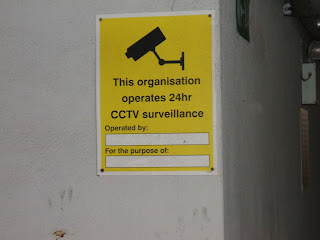 Blimey there are a lot of cameras in Manchester. During today's dérive I took more than 50 pictures of them in the space of about an hour and a half.

And nobody tried to arrest me - I'm almost disappointed.

Anyway, they can be found at the Flickr group if anyone fancies a look.

The revolution will not begin in shops or require a uniform

An advertisement has been bought to my attention that may well give entirely the wrong impression about loitering and I wish, on behalf of the LRM to squash the evil lies being pedaled before they damage the reputation of loitering beyond repair.

A television commercial for some kind of outdoor supplies emporium is currently being broadcast. The name of the establishment escapes me but it features an over zealous goon running about extolling the virtue of some particular cut price tents.* He then goes on in a rather vexatious manner to explain you can also purchase the correct clothing for all manner of pursuits – including hiking, climbing and loitering!

There is NO correct attire for loitering except that which you feel comfortable and stylish in.

I would venture to suggest ensuring you dress appropriately for the weather, wear comfortable shoes and be sure to add some glitter – but that is my taste and the LRM welcome anyone, no matter what they look like or believe in. Further more we reject attempts by the capitalist system to recuperate our actions for its own nefarious ends and believe loitering should be available to all, regardless of income. Indeed the right to loiter is a basic human right that should be enshrined in law not used as a tawdry attempt to sell so-called leisure wear.

The LRM: reclaiming the city for everyones pleasure. even those with crap hair.

*Just to clarify the LRM love camping and do recommend you procure something waterproof to shelter in but we do not endorse any particular brand. In fact we suggest sharing, borrowing or swapping stuff as much as possible so you need less money and thus have to work less to accrue it - becuase less work equals more time for loitering equals a happier and more just world. Taa daa! xx
Posted by morag at 05:36 1 comment:

Hooray! Its that time of the month again – yep, this Sunday is First Sunday and due to popular demand we’ll be hosting a walk focused around the CCTV cameras which guard the people’s republic of Mancunia. Who is watching us and why? Let’s have some fun and spot the undiscovered wonders on our streets. This promises to be an enlightening and fun mooch with a twist with some special, spectral guests…..

Please join us this Sunday, 7th September, 2pm at Café Pop (Oldham Street, basement of Pop Boutique) I’ll be there from 1 O’clock enjoying one of their scrummy veggie roasts so if you want a natter first don’t be shy.

Plans are afoot the derive may end in folk music and refreshments but as ever proceedings will evolve with the flow of participants. And don’t worry; we may lead you delightfully astray but we promise it’s all perfectly legal.

Anyone and everyone is welcome to join us on our mission to remap Manchester; the only requirement is an open mind….

For more details please email loiter@hepzombie.co.uk call the hotline on 07974929589 or find us at http://www.nowhere-fest.blogspot.com/ or hidden in the depths of dreaded time sucking facebook monster

PS I’ve have been asked to forward an invitation for a very good cause from Dale whom many of you will have met at LRM events….(nb unlike LRM events this isn’t suitable for under 18s and you need to buy tickets in advance)

Come and try over 50 top wines from around the world (and some rather fine malt whiskys) in an exclusive venue There is also a private bar and live entertainment. Tickets are a tenner - literally pennies for each wine you try. Tickets can only be purchased IN ADVANCE from my shop in Manchester City Centre. Oddbins-0161 228 0849. We're just off Saint Peters Square a few yards up from the Waterhouse pub. PROFITS-if we make any, go to the mental health charity MIND, in memory of a long-term friend and colleague who recently passed away. This is a ridiculously cheap quality night out
Posted by morag at 08:20 No comments: